When the show can’t go on: Conceptualizing designers’ work for CMTS’ and KCST’s canceled productions

When the show can’t go on: Conceptualizing designers’ work for CMTS’ and KCST’s canceled productions 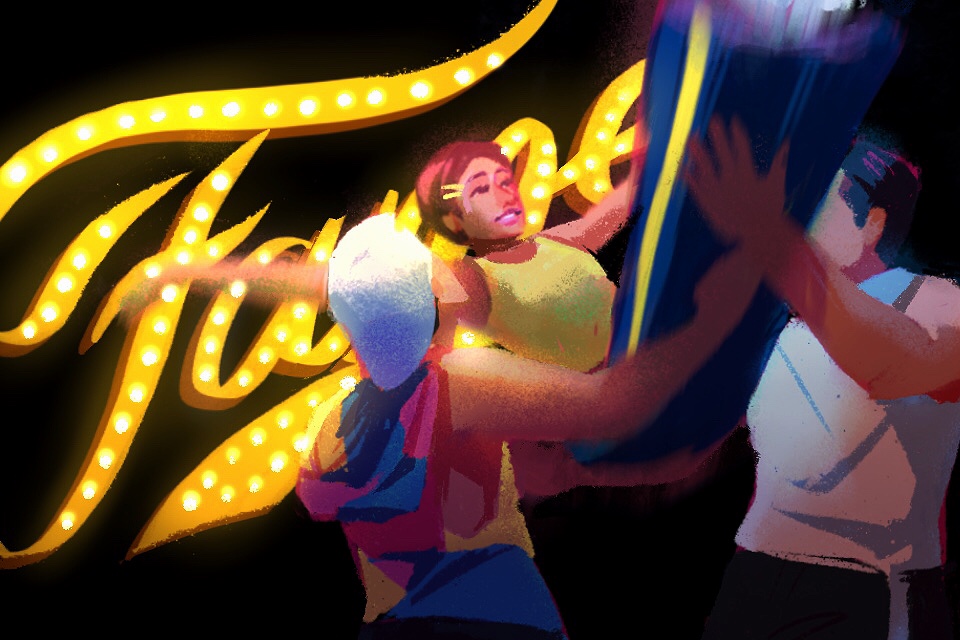 In part two, Spectator explores the mystique of King’s Crown Shakespeare Troupe’s outdoor production of “The Tempest” and the raw athleticism of the Columbia Musical Theatre Society’s revival of “Fame," pictured above.

This spring, a number of student-led theatrical productions were deep into their months-long rehearsal schedules when Columbia administration made the call to move courses online for the remainder of the semester due to the COVID-19 pandemic. Without warning, the long work invested in these plays and musicals came to a sudden halt.

Spectator’s two-part series has taken the work and words of these productions’ designers and creative team members and spun them into conceptualized illustrations for a glimpse at what might have been. In part one, we took a behind-the-scenes look at NOMADS’ production of the student-written play “Ad Nauseam” and the Columbia University Players’ “The House on Mango Street.” Here, in part two, Spectator explores the mystique of King’s Crown Shakespeare Troupe’s outdoor production of “The Tempest” and the raw athleticism of the Columbia Musical Theatre Society’s revival of “Fame.”

Costume design for KCST’s “The Tempest”

Annually, KCST brings new meaning to the phrase “all the world’s a stage” by setting its spring production outdoors. The performance weaves around campus—down Low Steps, around Butler Library, or at the feet of Alma Mater—at night, and sometimes, sudden wind or rain makes an appearance, which presents unique challenges for the show’s designers.

With the elements of the outdoors in mind, co-costume designers Lexis Rangell-Onwuegbuzia, CC ’22, and Grace Clifford, CC ’22, of this year’s “The Tempest” planned to use the outdoor setting to their advantage in constructing characters’ garments, especially those of central character Ariel.

“You can see that there’s strips of fabric in every part of it—the sash, the bodice, the skirt, and even around the arms—because Ariel is a wind and water spirit. That [design] was meant to react to the wind that was inevitably going to be there because it always rains during [the outdoor] spring show—but that’s great with ‘The Tempest’ because it’s about a storm,” Rangell-Onwuegbuzia said.

And the costume functioned as more than just aesthetically mobile. The designers additionally planned to construct it as a piece that could work between cast members and the ensemble in tandem.

“These strips of fabric were something that the ensemble could grab onto [as] an extension of her,” Rangell-Onwuegbuzia said. “That very much influenced my design. I wanted there to be something you could see moving in the wind.” 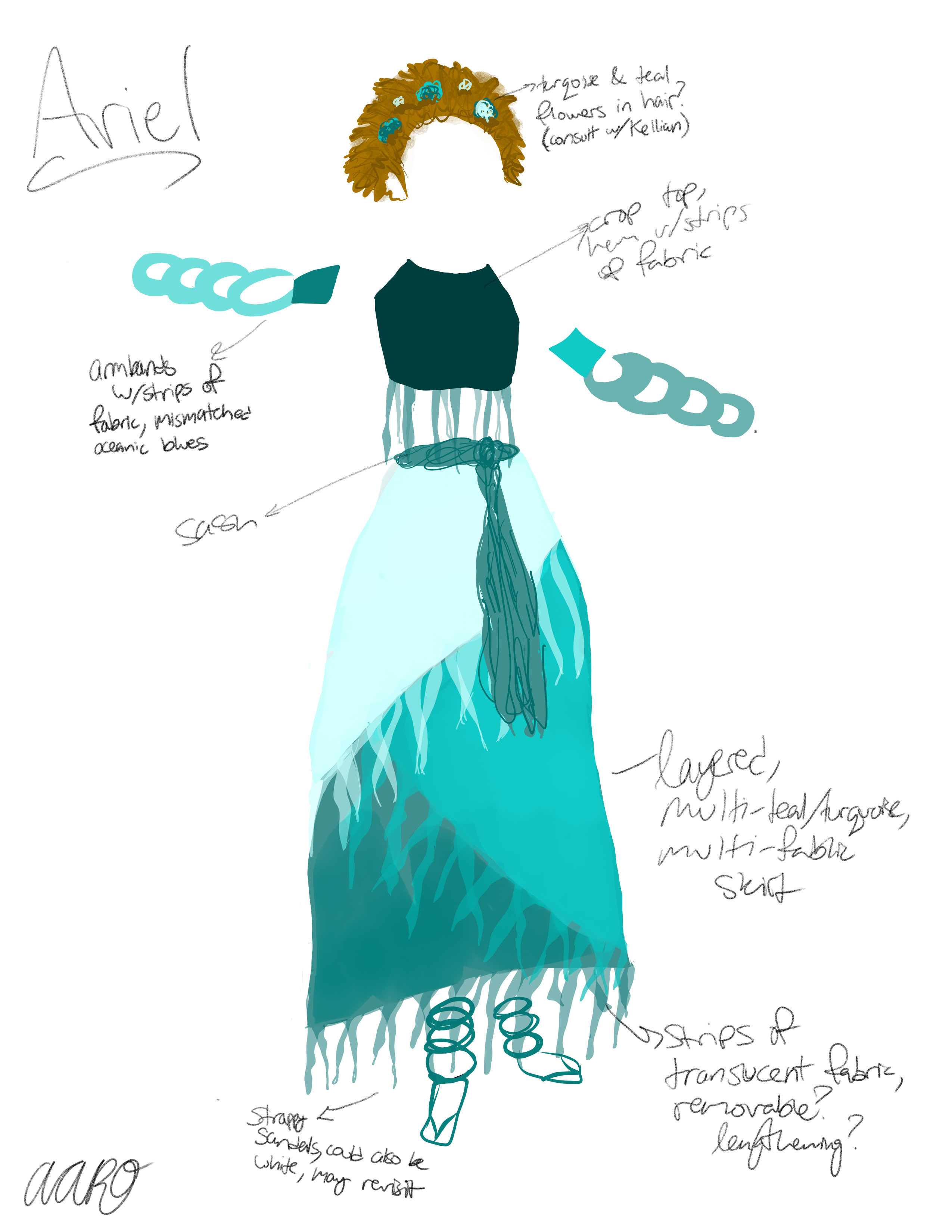 An original sketch by Rangell-Onwuegbuzia of the prospective costume for "The Tempest" character Ariel.

KCST’s “The Tempest” focused on the play’s themes of decolonization and indigeneity. The costume designers struggled to find a balance between drawing from nature as inspiration and not falling into the stereotype of associating indigenous people with nature—the “Pocahantas trap,” according to Rangell-Onwuegbuzia.

“[We wanted] something more authentic,” Rangell-Onwuegbuzia said. “We then leaned into silhouette difference, meaning the shape of a design, and the structure of the clothing that was worn, and creating that difference of worlds [between colonizers and colonized peoples]. So flowy versus geometric."

Clifford expanded upon this structural difference defined by the dichotomy of the colonizers and the colonized in the show.

“One of the key binary oppositions in these silhouettes is the idea that we wanted very structure-less and flowing [costumes] for the islanders,” Clifford said. “For the Europeans, we wanted a more constrained structure: … corsets, bodices, doublets, everything to lace-up and enclose.” 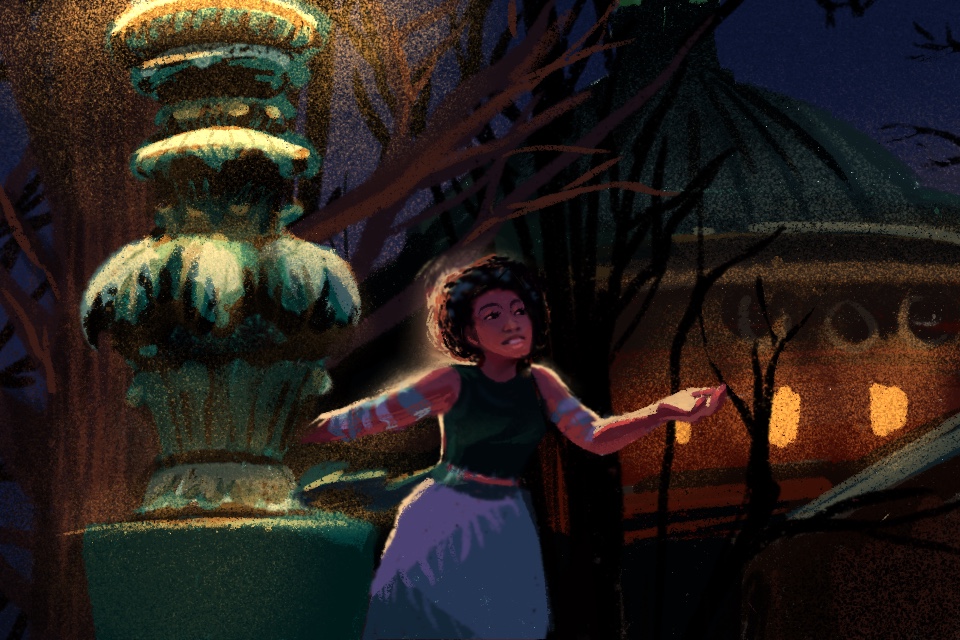 Liza Evseeva
Spectator illustrator Liza Evseeva uses Rangell-Onwuegbuzia’s sketch to conceptualize what “The Tempest” may have looked like performed on Columbia’s campus. Ariel actor Lauren Wilmore, BC ’20, is pictured near Columbia's Low Steps.

The 1980 musical film “Fame” has long been adapted into TV series, stage musicals, and films alike. The question for the designers of the CMTS production was whether to adhere to the tried and true ’80s aesthetic or to attempt to create a unique aesthetic of their own.

As co-lighting designers for CMTS’ “Fame,” Maddy Liberman, BC ’23, and Julia Hyman, BC ’22, envisioned a color palette of purples, blues, and reds—something “fun but also extra dramatic,” in Hyman’s words. Liberman concurred that the vision was “very ’80s, but not garishly ’80s.”

“I think that was definitely a theme for the whole creative team, getting a sense of the actual ’80s time period and not [its] being a ‘Halloween costume’ idea,” she added.

For a show that takes place in a New York-based performing arts high school, thus relying heavily on music and even boasting a rock band, it is no surprise that the designers drew inspiration from concerts.

“I went to a lot of concerts in the weeks before the show, and the script obviously has a lot of music … so I was thinking of concert lighting for a lot of it. That was definitely my inspiration,” Liberman said. “When I was at some of these concerts, I was thinking about their lighting and their lighting choices. I really love to mix the top light coming down and the side light coming from the side. … It sounds sort of simple, but it had such a cool effect.”

Liza Evseeva
Evseeva drew from rehearsal footage to bring to life a moment from Fame’s dance-heavy ensemble number “Dancin’ on the Sidewalk.”

In dreaming up dance moves for “Fame,” choreographer Sam Landa, GS ’22, similarly aimed to stay true to the show’s ’80s roots while making it accessible to modern viewers.

“I was like, ‘How do I make it clearly set in the ’80s but not make it so strictly dated that it allowed the audience to remove themselves?’” Landa said. “I wanted the audience to be able to see themselves in it. I would start with an eight-count, or a move even, from the choreography of the [‘Fame’] TV show or other ’80s choreography, and I approached it with the perspective of, ‘How would a dancer in 2020 reinterpret this?’”

This was Landa’s first time serving as the lead choreographer on a musical. Before he came to Columbia, Landa was a circus performer professionally, and he drew on that experience while working on “Fame.”

“I went to the National Circus School in Canada, so my background is much less dance-specific,” Landa said. “A lot of my choreography is much more acrobatic dance, or aerial, which is why athleticism for me is so important, to make a show where I was comfortable incorporating that athleticism.”

For a moment in the show that surely would have been thrilling to see—depicted in the illustration above—Landa came up with an acrobatic move in keeping with his circus background.

“The big, final lift was basically, in a sense, an assisted front tuck,” Landa said. “Camilla, who was the performer doing the flip, would stand, and then the two people, the two lifters ... squat, grab her legs, and lift straight up. And she rides that lift up and flips forward, and lands in a basket in their arms.”