With the world powered off, esports becomes a way to reboot communities off-campus

With the world powered off, esports becomes a way to reboot communities off-campus 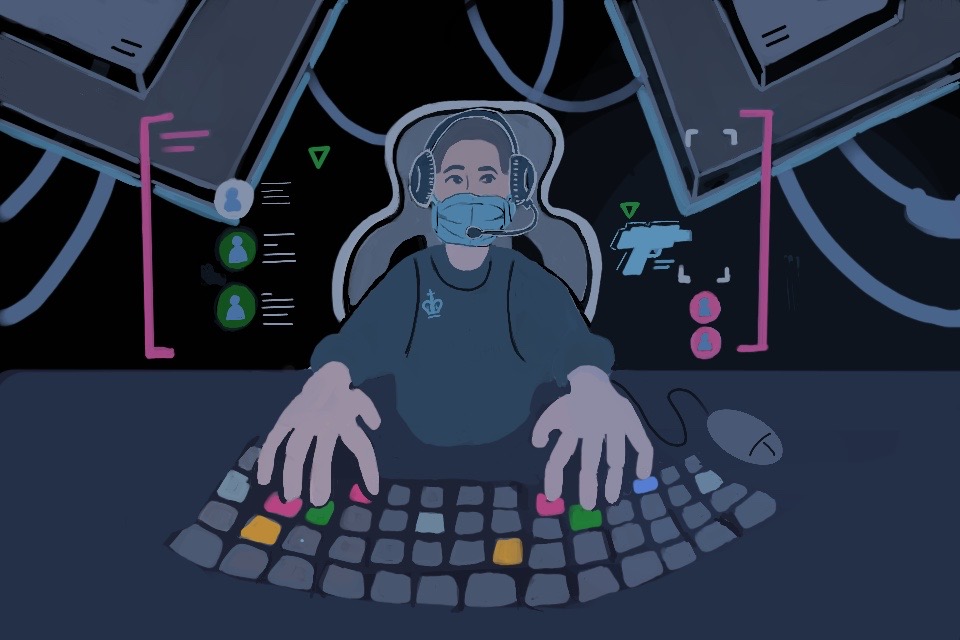 Despite the club’s inability to meet in person, Columbia eSports has continued to build a community and make change online.

As the world grapples with the wide-reaching effects of the coronavirus, sports, for the moment, have been effectively canceled.

Most students were requested to leave Columbia’s campus back in March, around when Columbia Athletics announced that no future practices or competitions would take place. For athletes that practice all year for just a few weeks of spring competition, this decision took away not only their chance for an Ivy League title but also their team community. But that community rages on for those involved in Ivy League esports teams.

Matthew Wang, CC ’22, president of the Columbia eSports team, said that while weekly meetings have been canceled, the team still continues to play with one another on a weekly basis. This engagement continues even beyond scheduled team competitions, he added.

“There's always gonna be a certain connection that we have with each other that we won't have with others, which makes it very easy to talk to each other,” Wang said.

Esports are video game sporting competitions. They range from fantasy battle arena-style games, like League of Legends, to futuristic shooting games such as Overwatch to even real-life sports simulations like NBA 2K, where players are able to act as the members of their favorite teams.

Unlike traditional sports, which focus on real-life, physical settings, esports allows participants to play by themselves or with people halfway across the world; it can be either a solitary activity or one observed by tens of millions of spectators, like the League of Legends championships, whose 2019 viewership of 100 million rivaled the Super Bowl.

This level of commitment was not always the culture of Columbia eSports. While it has a long history on campus, the team was not active when then-first-year Wang wanted to get involved. As an active gamer in high school, he thought it would be a good way to find a community, and took over the club.

“The reason why we wanted to have esports teams is because we all had that competitive spirit to play video games and it was a really good way to bond together and meet people,” Wang said.

Under his leadership, the Columbia eSports team has grown to around 50 members and regularly competes in tournaments.

Some esports enthusiasts, like Wang, entered Columbia with a strong passion for esports and video games as a whole. However, others, like Josiah Cohen, CC ’21, became involved in the greater esports community in different ways.

Cohen, who is not a member of Columbia’s team, was not an active esports fan. He was approached by a friend about an opening for a position as an esports writer and took the offer. Now, he is the managing editor of Dimer, a publication that exclusively writes about NBA 2K and also has reported about esports for the Sports Network. For Cohen, it was his previous connection to sports that made the transition to esports reporting a smooth one.

“I always liked writing about sports, liked covering sports. … So 2K was a natural sort of bridge to esports since it’s something that’s very familiar to a sports fan, even though it is a video game. You can tune in any second and recognize what’s going on,” he said.

And tuning in is a major aspect of esports culture, both for competitors and for fans who enjoy watching streams of other people engaging in the game. Travis Scott’s Fortnite concert drew over 12.3 million people to the platform, the highest amount of traffic Fortnite has ever received. This season, the average NBA game only had 885,000 viewers. For 2K fans, the NBA 2K Players Tournament brought together 16 NBA players—including Kevin Durant, who is an avid fan of the game—to compete during a livestream. The stream received 25,000 live viewers.

This large-scale celebrity involvement in esports has come on the heel of the industry’s meteoric rise to become one of the most profitable new markets. After passing the $250 million revenue mark in 2015, esports has skyrocketed, gaining over $1.1 billion in 2019. By 2021, it is expected that over 550 million people will play esports globally.

While Columbia’s club team allows anyone who is interested in playing or competing to participate, each year, new universities across the world give large scholarships and recruit for their esports teams like they do for any other varsity collegiate sport.

This popularity not only generates profits for esports companies but also creates an opportunity for social impact. The Yale esports team, a club organization, thought to use the hype of esports to raise money to help fight COVID-19. Events director Lucy Liu, alongside co-president Jeffrey Zhou, worked to create a charity stream to support the World Health Organization.

“We thought that in a time where actual sports events were being canceled, that people were unable to gather together in person, esports was the perfect avenue that could still sort of create that solidarity, but online,” Liu said.

The members of the Columbia team had considered doing a charity stream. The idea of an “Ivy League stream” originally came to Columbia eSports treasurer Leonardo Arvan, SEAS ’22, right after the team had finished its season.

In collegiate esports, once a team loses its second match, it is eliminated from the tournament. Following a loss to a strong opponent during the second match and leaving the competition 3-2, Arvan noted that the team had still performed better than any Ivy League team. From then on, he became interested in hosting a matchup between the Ancient Eight.

Luckily enough for him, Wang had just received an invitation from Yale to participate in the Ivy League charity stream, which also included the Massachusetts Institute of Technology and Stanford University. Columbia immediately agreed to co-host the stream.

In order to gain publicity for the stream and raise as much money as they could, both teams sought out sponsorships from professional esports organizations; they ended up receiving sponsorships from esports powerhouses TSM, Team Liquid, and FlyQuest. In addition, Yusui and Jenkins from Team Liquid Academy agreed to do a Q&A session to give the stream higher viewership and donations.

“We knew that if we had the support of organizations with a long and successful history such as TSM, Team Liquid, or FlyQuest, then we’d definitely be able to reach out to a much larger population and hopefully, get more donations for a very relevant and important cause,” Liu said.

TSM played off the “natural Ivy League rivalry” and promised the teams that it would match the donation, of up to $5,000, to the school that raised the most money. While Columbia only came in second place in the tournament, the team raised over $6,000, the most of any competing school. Including TSM’s donation, the 10 teams collectively raised $16,475, over three times the initial goal.

When asked what the appeal of watching someone else play esports is, Cohen simply responded: “Well, why do you watch LeBron James play basketball?”

Esports has been able to gain such a large fanbase in large part because of the different ways aficionados can get involved. Like any “land sport,” one can be a spectator, a player, or simply just a member of the fan community.

For Arvan and Wang, they transitioned from letterman jackets to mousepads in college, citing a similar feeling to actual sports.

“Me and Matt both played varsity sports in high school, so we both have this athletic sport idea. And I think it's very closely analogous. If you play with a team you get close, you create good relationships because you go through the same sweat and blood as the other person and you have more shared experiences,” Arvan said.

Cohen cited the psychology of the sports fandom—the sheer devotion of fans no matter how bad their team is—and said the same tendencies to root for a team have begun to play out in the professional esports sphere.

Esports offers the same accessibility many physical sports do and some games are completely free to play.

“Whether or not you want to go pro or you want to learn more, as long as we have enough people who want to play the game together, we will have a team for you that you’ll be able to participate in,” Wang said. “We’re going to try and make it so everyone can participate competitively if they want to.”

It is this open-door model that has made Columbia’s squad so successful—and allowed esports to become an extremely profitable business overall.

Tespa, one of the leagues in which Columbia competes, not only hosts competitions but also helps expand the esports culture on campus by advertising and giving out merchandise. Tactics like these have expanded esports communities on college campuses exponentially.

However, according to Cohen, it is the professional aspect of esports that has caused its meteoric boom.

The aspect of professionalization of a seemingly mundane activity mirrors the progression of most sports. Basketball was created in a YMCA gym, baseball was a modified version of an English children’s game to play on college campuses, and esports was created to be a mindless distraction for people to play with their computers. While esports may not require physical strength, its pro players must cultivate a different set of skills related to dexterity, hand-eye coordination, and reflexes.

But the solitary nature of esports is what separates it from traditional sports, and according to some, has held it back from truly reaching the potential of its physical counterparts.

“Really, it’s a question of what kind of balance that can be struck between appealing to all sports fans, NBA fans, and appealing to esports fans. It’s a very delicate balance that no sports league has figured out yet because the scene is just so new to this,” Cohen said.