For multiple members of the class of 2020, Ultimate Frisbee was home.

For multiple members of the class of 2020, Ultimate Frisbee was home. 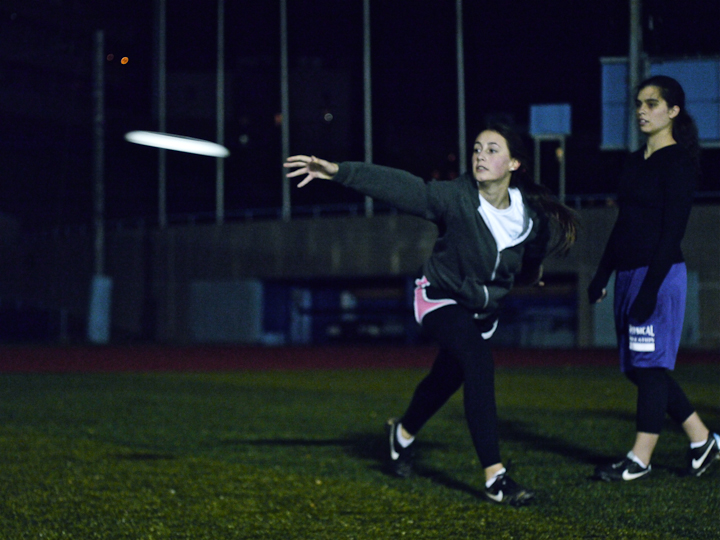 A popular choice for club sports around the country, Ultimate has carved out a name for itself on Columbia’s campus.

This is the tenth edition of “The Season That Could Have Been,” Spectator’s series on spring 2020 sports.

Before she joined the Ultimate Frisbee team, senior Kyra Schindler had never played an organized sport.

Schindler, who will graduate virtually with Barnard College’s class of 2020, was a dancer seeking to get outside her comfort zone when she first arrived on campus. However, when she joined the Ultimate team, Schindler did more than just branch out—She found a home and a family.

“Frisbee was one of the first communities that I had on Columbia’s campus, so it had a really big impact on my time there and [whom] I really felt close with,” Schindler said. “It’s shaped my college experience in a really big way.”

A popular choice for club sports around the country, Ultimate has carved out a name for itself on Columbia’s campus. The women’s team even contains two squads, Pandemic and BaeWatch. In total, the men’s and women’s teams consist of about 100 students from all four undergraduate schools.

It is common for members of the Ultimate team to arrive with little knowledge of the sport. Seniors Clayton Becker and Noah Igra echoed Schindler’s sentiments of originally hoping to simply try something new before settling into the Frisbee community.

“Ultimate Frisbee’s that sport you play at camp over the summer [where] nobody knows how to throw a Frisbee,” Becker said. “It’s a very eclectic group, a very interesting sport.”

Becker, who participated in a dual B.A. program betweenSciences Po and the School of General Studies, joined the team when he came to New York for his junior year. Igra found the team at a club fair in his first year of college.

“I definitely was interested [in] the athletics involved, but I actually found that the people on the team are a very tight-knit community, a very close group of friends that really provided a network for each other. That really appealed to me as a [first-year]. It changed everything, essentially. I don’t even know what school would have been like without Frisbee,” Igra concluded.

The close-knit nature of the team has elicited plenty of bonding adventures. Becker recalled that his favorite memory from Ultimate was the team’s tradition of heading to 99 Favor Taste in Chinatown, enjoying “ludicrous amounts of hot pot,” and then walking across the street to Ben & Jerry’s and ordering a Vermonster, a 20-scoop behemoth of an ice cream sundae, to share.

In addition to a community, the players also gained a sizable time commitment. The Ultimate team is busy throughout the academic year with between two and three practices a week (though BaeWatch requires just one), as well as weekend tournaments and indoor workouts in the winter.. Outside of formal commitments, players can often be found tossing on the lawns outside Butler Library. The teams also travel frequently: Schindler cited the Cherry Blossom Classic tournament in Washington, D.C. as one of her favorite memories.

This year, the team was set to spend spring break in Myrtle Beach, South Carolina. As COVID-19 spread across the country, both varsity and club sports were canceled. With these cancellations came the loss of many opportunities to bond as the team was now scattered, Igra said.

Still, the Ultimate players have managed to stay close. Igra said the team hosts Zoom parties every week or two, where people can drop by, talk, and play games. According to him, the captains sometimes chime in with game footage, but the space is mostly reserved for “a group of friends, or a small family, just seeing each other again.”

Despite these chances to connect, Schindler is acutely aware that something is missing: the sense of finality that normally accompanies the end of Ultimate season. Generally, she said, the team hosts a large potluck where seniors are honored.

More broadly, Schindler said, “I feel like I just wish that I would have not necessarily done more, but spent more time with the people that I care about and really taken the opportunity to make sure that they knew how happy I was that I had gotten to spend the last four years with them.”

Back in her hometown of Las Vegas, Nevada, and lacking closure, Schindler is sending e-cards to professors to thank them and say goodbye. The coronavirus has also influenced her job hunt: while she hoped to dance on a cruise ship for a year after graduation, Schindler will now use her biology degree at a lab in New York.

Meanwhile, Igra is busy filling out medical school applications. Even after the loss of the team’s spring break trip and his senior spring, he is thinking more about the future of the team than his lacking semester.

“I’m not happy about the way my last season ended, but I’m looking onward. I’m not heartbroken about it because I know that the team will still move on. l know that they’re going to do great things, and they’re really only going to be strengthened by this entire phase,” Igra said.

Becker, who plans to take a year off before graduate school and has “already gone through however many stages of grief” regarding the past few months, agreed. “I almost feel worse for the younger guys on the team. ... Frisbee has been an important part of my life and the group of guys is super fun, but I’m not going to go on and do more Frisbee after this year,” he said.

Igra is confident that the connections he has made as a member of the Ultimate Frisbee team will remain strong regardless.

“I miss the sport, but I still have those same friendships, and nothing along those lines has changed,” he said.