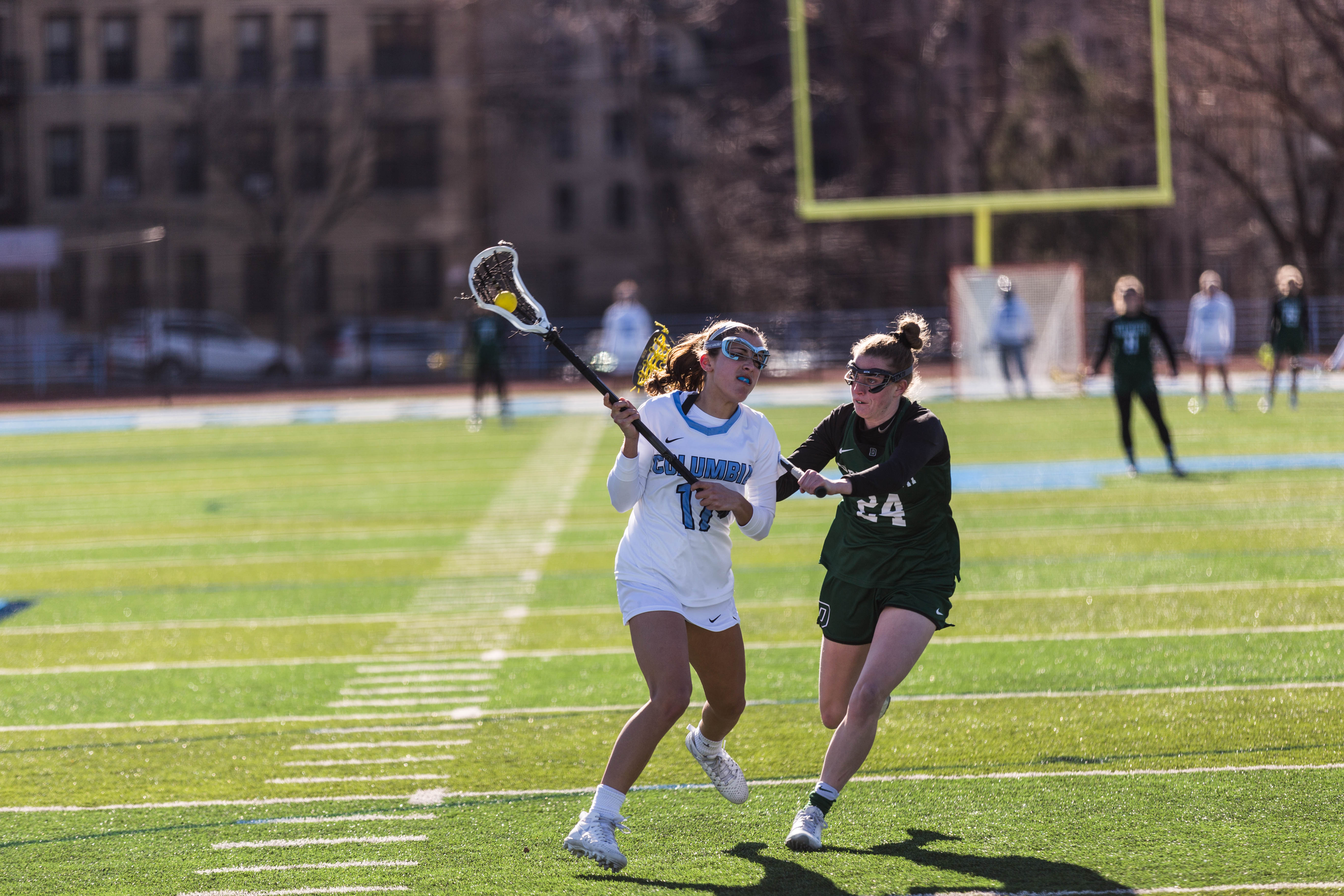 This is the ninth edition of “The Season That Could Have Been,” Spectator’s series on spring 2020 sports.

When Columbia lacrosse added eight first-years to its squad in fall 2016, it was in the middle of a turnaround. Then-coach Andrea Cofrin was taking the program from an Ivy League doormat to a consistent contender, and in her second year, she introduced eight high school standouts: four All-Americans, three academic All-Americans, and three multi-sport athletes. All had led their high school teams to impressive heights, and at the time, Cofrin observed something like a prediction: “This group knows how to win.”

Lions have come and gone from lacrosse’s class of 2020. Attackers Carolyn Mann and Emily Velez left the team after their sophomore years in 2018, and midfielder Orna Madigan joined from the class of 2019. The class of 2020, as it graduates now, is seven strong, with four midfielders, one defender, one part-time midfielder/defender, and one goalkeeper.

Together, these Lions have scored 87 goals, recorded 28 assists, forced 116 turnovers, and collected 133 draw controls. Abby Roberts, a senior goalkeeper, has made 160 saves. This class of 2020 has one All-Ivy honorable mention —Alyssa Adamo last year—but by far, its highest statistic is turnovers, at 219. None of the players’ individual statistics are off the charts, but some of their collective season records and Ivy wins were record-breaking.

Most of the squad’s victories came in its first two years at Columbia. In 2017 and 2018, the class of 2020 filled roles and contributed where it could while the Lions went a combined 13-18 overall and 5-9 Ivy. In 2018 especially, the class of 2020 made a difference—midfielder Fallon Quinn was the third-highest scorer on the team with 26 goals, and Madigan was named to the All-Ivy Tournament team (one of only two players in Columbia history with the award).

But in 2019, the team’s victories dropped off as this class started to carry the team instead of contributing to it. The class of 2020 helped create the exception in program history, but now it began to feel the rule: the Lions finished last in the Ivy League and went 4-11 overall. Only Adamo was awarded an honorable mention All-Ivy in her junior year. Madigan and Quinn scored only 16 goals between them—less than half of their total the year before.

2020 was worse. The senior class led the Light Blue to eight straight losses before its season was cut short and Cofrin resigned mid-year. In an article written before the 2017 season-opener against Drexel University, a Spectator sports reporter observed that by “gaining eight first-years to make up for three graduated seniors ... the Light Blue has improved the depth of its current squad … to set itself up for a competitive season.” The class of 2020 replaced three graduating seniors in the fall of 2016, but by the spring of 2020, only two seniors were consistent starters for Cofrin’s team.

Of the seven graduating seniors, only Madigan and Quinn led the team in any statistic, assists and free position shots for the first and caused turnovers for the second. None of the seniors recorded the most goals, points, or saves on the team in a season. As far as Ivy League honors go, none received much league recognition, even compared to teammates in other classes. But when these first-years joined the program in 2016, the Lions jumped from last to fifth in the Ivy League. The class of 2020’s legacy is exactly this—no one player dominated the class or carried the team, but the Lions, for a few years, got significantly more competitive with depth, support, and solid play.

There is something to be said for the kind of athletes that made up the class of 2020—solid, dedicated role-players who helped their program win. When the Lions’ season was cut short earlier this year, they still had five Ivy contests left—three against teams that they have beaten at least once in the past three years—and only one win needed to tie Columbia’s all-time record for Ivy League wins in a four-year period. Despite placing only one player on an All-Ivy season team, the class of 2020 could have broken the record for most Ivy League wins in a four-year stretch.

In 2017 and 2018, the class of 2020 provided depth and support to take a transitioning Columbia lacrosse team to a succeeding one. As their responsibility went from supporting the team to carrying it, this year’s seniors struggled to produce both individually and collectively. They knew how to win—they did not know how to win at the helm.

But they still leave the program with the best Ivy League win percentage ever and one win short of the most Ivy League wins in a four-year period in program history. Regan Steed, Caroline Thompson, Alyssa Adamo, Fallon Quinn, Orna Madigan, Brailey Faris, and Abby Roberts have experienced the highest highs Columbia lacrosse has ever seen, and their team will certainly miss the contributions they made to reach those heights.